Well its late January – and what does Mr Middleton expect us to be doing this week?

Firstly, Dig and clean up.I’m not sure what sort of Winters Mr Middleton had, but ours seem to be very much wetter!!! As before there is no way that any sort of digging, or outside work can be carried out. Any attempt at this will just create a muddy, wet, morass, which would not recover this year.

Third. Force Seakale. I know nothing about SeaKale, or that you could indeed force it. I don’t have any crowns so will be unable to do this. However, I will be looking to establish some crowns during this year.

Fourth. Sow Onions and Lettuce. As stated before I will be sowing sets in Spring so will not be sowing Onion seed. Lettuce are coming along in the Poly Tunnel, no more need to be sown now.

Fith. First sowing of Tomatoes. Like the Peas last week, I have never sown Tomatoes so early. Mr Middleton states that sowing now will bring a Tomato harvest in June. Since Goswinks is always demanding Tomatoes early I am going to sow some now, as per Mr Middleton. The variety I have chosen is Tigerella (Mr Stripey), a very early variety. I am going to grow them indoors (on the window ledge), as I feel even the Poly Tunnel will be too cold for germination. I have sown 9, on the assumption that 3 or so wont germinate. I will be looking to grow some larger Tomatoes later for a main crop.

Sixth. Force Herbs. Mr Middleton suggest lifting a few roots and forcing them by bringing them inside to grow. This sounds like a good idea, however ‘erbs are Goswinks responsibility, so we will see what she does. This is a bit of the Kitchen Herb garden as it looks today: 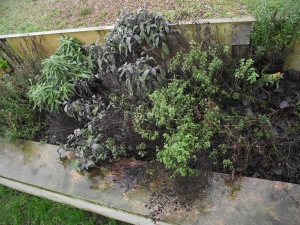 Seventh. Examine Seed Potatoes.As noted in last weeks post, the stored potatoes have started to sprout in the warmer weather we have been having. Perhaps these have now become my Seed Potatoes?? 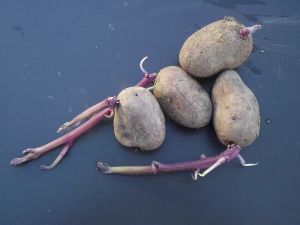 These are a variety called Red Duke of York, a favourite of ours. They are grown as an Early, but can be left in to become a Main Crop. They are good to leave in, dig as you eat them (there is nothing better then digging Red Dukes and immediately boil them and on a plate with butter inside 20 minutes!!), because any left will provide a great Main Crop.

Eighth. Spraying and Pruning Fruit Trees. This is not required.

Ninth. After a Gale. It seems that Mr Middleton didn’t get wet Winters, but windy ones!!!! There has not been a Gale here this Winter, yet, so no need to check trees and pick up broken branches.