It is, (or was) the last week in March – what should we be doing now, Mr Middleton?

Well, just to catch up – I still have not constructed the Compost Heap!!! However sowing has gone into overdrive and I have (to summarise) :

Onions and Shallots in the ground

Broad Beans in the ground – However these are on a time frame now – if they don’t show any interest by the weekend I am invoking Plan B – sow inside in pots and plant out assuming the ones outside have been got at by our friendly furry animals. In order to ensure a harvest its important to keep an eye on what and when stuff is growing – in order to be quick at making decisions like this, or you may lose all chance of getting a harvest.

Inside are Cabbage, Salad, Early Carrots and Rhubarb growing. The remains of the Peas sown in January still waste space (yes…Mr Middleton) 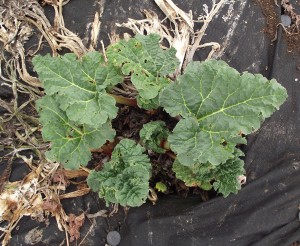 Unforced Rhubarb doing almost as well…is there a lesson there?

Sown in the last week are Peas, Parsnips, Leeks, Brussel Sprouts, Purple Sprouting Broccoli, Sweet Corn, Tomatoes, Runner Beans, Climbing Beans (possibly a bit early) and Dwarf Beans and finally some Later Carrots. The intention is all the above will get a second sowing in about 6-8 weeks. also sown is some more Mixed Salad leaves. Some Bolthardy Beetroot finish the lot off.

Also I have got hold of some young Strawberry plants to fill the holes in this years crop.

Some Strawberries in the Poly are already flowering

So, as you can see I think this is the time when it gets really busy, and growing starts to kick off – lets go back to Mr Middleton.

First. Last Chance for good Digging. Well yes that would be nice but still a bit too wet – Whilst I was holding on digging the allotment, with the warmer weather I want to dig it to arrest the growth of any weeds.

Second. More Early Potatoes Now. Yes, its a good idea but this year I am sticking with just one row.

Third. Plant Shallots and Garlic. Done. Gold star to me!!!

Fourth. Make Asparagus Bed. I am not increasing my Asparagus this year.

Fifth. Sow Parsley, Thyme, Sage, Celery. This is Goswinks territiroy – and they have been sown and are showing interest in growing!! More next time.

Six. Stake Cucumbers. As last time – they are only 2 inches high!!!!

Also the quirks of the Calendar mean Mr Middleton has had a time shift and added a 5th week for March – This in summary tells me to sow Lettuce and Sweetcorn and outside sow Carrots.

So following Mr Middleton I should not have sown almost all of the things I have sown!!! I am going to review what Mr Middleton is saying here – I really want to know why there is this big contradiction between what I am doing (and I am not doing anything especially different to most years) and what he is saying. Interesting.

Maybe the final May frost will prove him right!!!!