Wargaming weekend – 13th May to 15th May

Well Mike came up for the weekend so we decided to fit as many games in as possible!!

We started with VIII Corps, then played the new X Corps – Mike enjoyed them both – spread the word!!!

On Saturday we played the RealTimes Wargames ‘Playing Leapfrog’ – A WW1 Battalion level game where you take the roles of attacking Division generals and the Germans are pre-programmed. I lost almost my entire division and got no further than the German Front Line – Mike got to the objective – the Second Line – but had to withdraw because everyone else had done so badly!!!

I was sacked for insubordination…….Mike was allowed to continue commanding his division.

Afterwards we played 2 quick games of Peter Pigs new ‘Regiment of Foote’, the Cropredy Bridge scenario, all of which Mike won 😦

Then we decided to upgrade – a bigger scenario – we played First Newbury. The beauty of these rules are is that games only last 8 turns – and you get a result – they are really good session rules.

I played Parliament and Mike the King lovers. 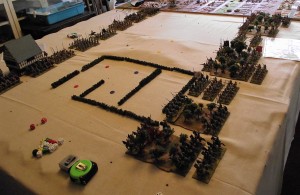 First turn and Parliament on the right starts the game badly set up mixed between woods and clear fields. The King holds Newberry, and has an altogether easier set up. 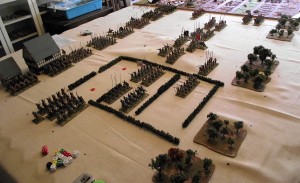 First turn – the Parliament storms forward in a somewhat haphazard manner – getting itself held up in the woods and thus weakening its line.

Second turn – the Royalists come forward hard and match the Parliamentary forces in push of pike.

Third turn – looking good for the Parliamentarians on each flank – to my surprise!!. In the centre the Royalists drove forward like the pack of English Forwards against Italy on a wet day at Twickenham. I lost three units in one go.

Fourth turn – The Parliamentarian flanks still push forward, and try to encircle the Royalists in the centre….taking out 1 unit.

I played the French against Mikes British Light column………my swarms of skirmishers swept forward and knocked his 95th backwards, and then force of numbers overwhelmed his line. It was a cracking game, and as a first run through of the rules pretty successful. I can see myself using the rules a lot, they have a simple logical play sequence and easy to learn mechanisms – and give a good tense game.

Hopefully Mike will be back in August.