X Corps at the Somme – a play through

The new game of the VIII Corps at the Somme series – the X Corps will be out soon. It gives a much more sophisticated game that the players really do become immersed in. This post will show the turns played in a test game from the 7th turn, when the British player has decided to begin the assaults on the German Lines after the 7 day bombardment.

We start with the British about to go Tactical. They have artillery barrages on two German second lines and two on the German support lines, but the Germans have played their cards well and kept the bombardment off the front lines. This means the British have to assault Front lines that are not under bombardment, a significant advantage for the Germans as they maintain their defence modifier. The situation looks like this: 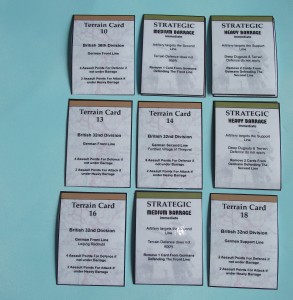 The first British assault is in the 36th Division area – against the German Front line (Terrain Card 10). The British have decided to attack here as they at least get some assistance from the Medium Barrage which reduces the German defence. They put 8 points of assault into the attack including the sunken road card – this card negates German terrain defence modifiers and wire cards. The Germans decide to put 3 assault points in the defence but include a barrage card and a card that negates the British training. The Germans are playing a long game here letting the British expend their energy.

Final count – 3 German assault points to 4 British, the British sweep into the trench and capture it. They decide to consolidate this trench which means they can make use of the terrain defence modifier if they are counter-attacked.

The British decide to take advantage of the first attack and assault the Leipzig Redoubt in the 32nd Division frontage, Terrain Card 16. Remember to win they need to reach the Support Line on 2 of the 3 lines. Again the British have 8 points and use the sunken road tactic……….the Germans lay three cards, but lose one because of the British barrage in the Second line, leaving two cards. One of which is Wire. The British Sunken Road card negates this, so they win again.

The British consolidate again and decide not to attack any further this turn, they need to manage their resources carefully. This is what the situation looks like now:

In the Strategic turn the British launch a counter-battery against the German barrage in No Man’s Land. This was an effective barrage for the Germans as it reduced the British attack deck, so it is a good tactic to try to remove it. The Germans remove some more barrages, and successfully land some barrages on the British captured trenches. 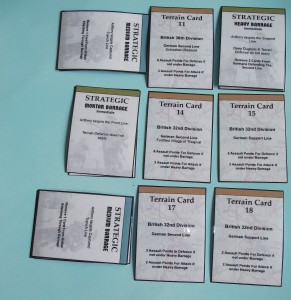 The British decide to attack again. From the captured Leipzig Redoubt, launching 8 assault points to Terrain Card 17, the German Second Line. However the German barrage removes 1 point. The Germans are weak at this stage – and just place a Wire card. The British however have continued to use their sunken road tactic and negate it – another win for the British. The assault is starting to look promising.

Although they are weak the Germans counter-attack the recently captured German Second line. They only have 3 assault points, but they don’t need to win, just wear the British down and reduce their capacity to attack. The British play 7 points, and beat the counter-attack back. A very good rate of return for the Germans though. Have the British been weakened enough to stop attacking? For now, yes.

In the next Strategic Phase an exchange of barrages over the battlefield leaves the trenches as below. Will the British attack again?

The British are going to risk attacking again – the Support Line, Terrain Card 18 – they only have one ‘Over the Top’ card left though in their current hand, so its risky, but they could achieve one of their victory conditions. They put in 8 points, after the German barrages and the Terrain modifier they are left with 2. The Germans easily win, beating the British assault off. The Germans remember the counter-attack last turn and wonder if they hadn’t launched it if the British would have been strong enough to win this time. The British have now lost an attack, they cannot lose 2 on the trot, so the next attack will be tense.

Again in the strategic phase barrages are exchanged and the Germans perhaps getting the upper hand with barrages placed to try and deny the British an easy attack. For the Germans its about denying an easy path for the British, and marshalling their own strength for counter-attacks.

The British have to attack to keep winning, as they have already lost one assault. They choose the easiest route to win – the 32nd Division front because it is under British barrage. They put in 8 points, a concerted push. The Germans 1. The British have won another trench. That’s enough for now, if they were to continue they would open themselves to a quick counter-attack which could lose what they have gained. If they were to attack Terrain Card 11 the Schwaben Redoubt for example, they would need to move through the German barrages before assaulting the trench, and because it is not under a barrage it would be a full 6 defence. A very difficult proposition. its a similar story on the other side so the best tactic is to hold fire and attempt to get more support through cards in the Strategic Phase. 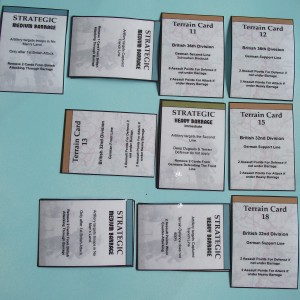 After the Strategic Phase the British attempt to attack the Support Line again, Terrain Card 18. They put in 9 assault points. The Germans place Wire……..the British get beaten. Again the British are on the ropes. Rather then hold back and gather strength again they British become headstrong, or desperate. They go again…………..6 assault points, the Germans can’t have Wire again, surely? Again the Germans place Wire. The British luck finally runs out and they are beaten soundly.

The Game ends as the British are beaten two times in a row. The Germans played the game deeply, allowing the British into the position and then slowly weakened them until they lost too many assaults. 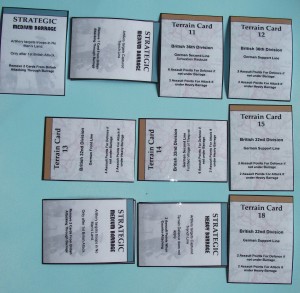 The Somme Series is published by Vexillia Limited.  For more details, free samples and links to Wargame Vault visit the Vexillia web shop