By acatcalledpiglit May 22, 2016 chickens Smallholding sustainability 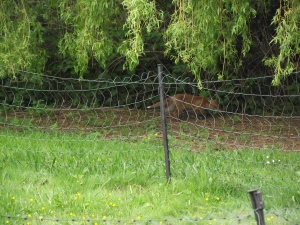 We have just got an extra 4 chickens, as layers, so we can produce a half-dozen a day to sell to pay for their food. But………..look who dropped in to have a view. Mr Fox.  It is a young one, not sure of itself, not sure of its escape routes, and a bit dozy to be honest (I got to within 6 foot of it) – The new chickens, knowing no better chased it as it moved round the pen, and the cockerel, Nelson made one hell of a noise. 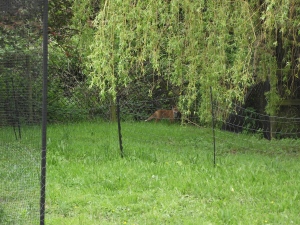 Much to my cockerels disgust I have put them on lock down inside the secure area. I’ve ben round pruned overhanging trees and banged in a number of posts against the electric fence posts to ensure the fence is tight. I’ve also cut down foliage that was blocking the view to the chicken area from the kitchen/diner so we can keep an eye out. Doesn’t make the fox go away but at least increases the chances the hens will be fine!!