A visit from Kevin

Kevin came up Monday night for a few days to help with the Alpaca shearing on Tuesday (More about that on another post). Obviously we got a few games in!!!

First up was VIII Corps and then X Corps the upcoming game. Both proved fun and good games!!

Next up we played a Mexican skirmish game set in the Pancho Villa era (1912-20ish) – These were Kevin’s own modified rules and worked really well – naturally I would say that, I won…..Kevin was trying them out and hopefully got some ideas.

Next up we played Sharp Practice – the second try out – I have got the main structure now, just need to play a few more games to flesh out the more nuanced rules and mechanisms.

Anyway – it was my first love – the Peninsular War. Kevin chose the British (of a choice of British or Spanish) and I was my natural force the French. 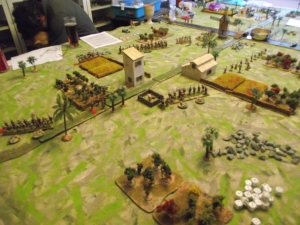 This is the view middle game – the French have moved up in the centre and put a formation and a skirmisher group around the left flank. On the right flank a formation of skirmishers kept the British pinned down. The British main line formation is in the middle, exchanging fire with the French. Yes, that is beer, and a cat and Kevin at the back…. 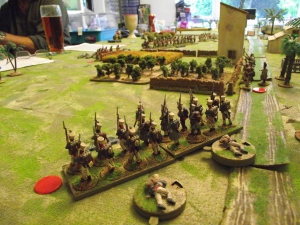 The view from the left flank. The French formation moves up, very very slowly……..in the background the French skirmishers won the race to the wall and are now beating back the British skirmishers. All looks good for the French. 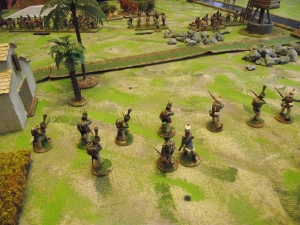 On the right flank the French skirmishers are pecking away at the British line formations, and a surprise – a Spanish Group!!! The British officer falls wounded and Kevin (who cleverly recruited a physic) sends his medic to restore his health. 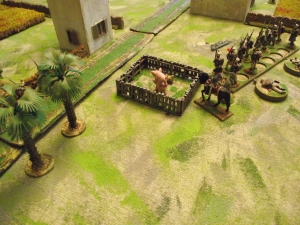 And then. OINK. Three command cards were drawn which creates a random event – to the British – Pigs in the sty escape and charge towards the British! A chance will they break the formation…….No. They veer off and pass safely by. Two moves later – same thing – the pigs escape again – but this time hit my formation, and break it. The two groups start to withdraw due to the shock, and blew a hole in my defence. Beware of pigs!!!

I made the mistake of moving the leader away thinking he would be better used elsewhere – but actually I should have kept him their removing shock – because at every activation of the withdrawing groups they moved back again requiring a role on the ‘bad things happen’ table, reducing my Force Morale.

It turned into a race to the bottom of the Force Morale table for both sides  – which the French won, finally knocking the British over to zero to win.

It was a good game – both sides made mistakes – the French, at a time when they were turning the screw on the British, having the formation broken by the pigs and then leaving it to drain the force morale. The British, after the pressure had been lifted by the pigs, started to rebuilt their main line formation, but although it was by then the strongest unit on the table – it wasn’t used to gain victory.

Look forward to playing Sharp Practice again – I am going to try to field a complete Spanish force, and use cavalry next time.