Well its been a while – and a busy while at that. The weather in May has largely been cold and wet – a real knock back from April – and it has set everything back.

Grass growing well!!! Any way this is the allotment field from the top – the fruit trees (Minerettes) are blossoming, and showing signs of growing fruit (yay!). The old Brussels Sprouts are cleared – new ones ready to go. 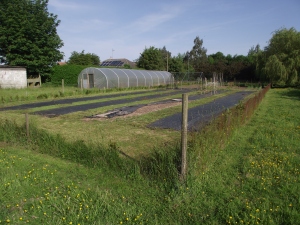 Same field, different corner. I am not using the weed membrane area this week – just encouraging grass on the paths. As you can see the yew hedge is growing so slowly (mainly caused by over growing grass and conditions too wet for yew)

The growing area from the middle – from the right – onions/shallots, Broad beans, Spuds, Peas, dwarf beans and climbing beans, Sweet Corn, Parsnips, Celery and Purple Sprouting Broccoli. I would say all is behind where it should be.

I cleared the weeds yesterday using my wheel hoe – really quick and deadly on a hot day – the weeds just die away!!

Form the other corner – you can see holes in the spud row – I reckon some of the seeds potatoes didn’t make it (they were last years spuds). Still 3 weeks or so from expecting any spuds – flowers only just developing. Going to be very late for broad beans as well – thanks to the rodents eating the first sowing. This is the second sowing – I have a tray of others ready to go in – and another sowing after that. Will hopefully be freezing for winter. Same applies for the Peas as well.

Chickens in lock down – not happy but safe!! 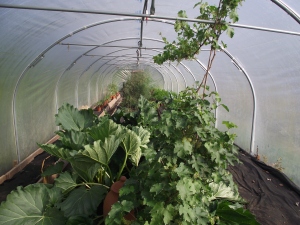 Poly from the further door – the grape-vine and the Rhubarb forest!! Lots of grapes coming – probably need to prune a good amount off. Need to seriously think about reducing the number of Rhubarb.

From the front – Tomatoes on the right – 8 earlys and 7 later types. To the front the peas in the containers – had a couple of meals with them so far – hope to have more. On the left, the lettuce, carrots and salad crops – we are now eating all of this on a daily basis!! (yay!) – second sowing of carrots ready to go with the idea they will last over winter (Autumn Kings are good for this)

In the middle is the Asparagus in the Strawberry patch – this is its second year so we are leaving to grow rather than harvest. Behind that are some Cucumbers – these are very slow this year.

Waiting to be placed are 4 Cucamelons – I’m a bit wary of these after last years Melon plant which took over the Poly and produced nothing – but we will see.

Now the sun is out its bloody hot in there!!!

3 thoughts on “‘Digging for Victory’ – update”