As part of my French force review for the Peninsular using the Sharp Practice 2 rules I decided I wanted to go for some irregular forces. I looked through my books and came up with the Gendarmes D’Espagne – set up by Napoleon in 1810. There were some 40 squadrons (only 40% were on horseback), the initial aim was to copy the French Gendarmes and be a sort of rural paramilitary police force. They were raised from pro-French Spanish.

I looked at what figures I had in stock and thought I could get away with using the Perry Dragoon bodies and Victrix 1804 French Infantry heads. I’ve used this combination before with the Spanish Cavalry. I wanted a bit of an irregular look to them – so odd hats, differing colour trousers etc, some with epaulettes,  plus I have given some carbines. I am going to do another mounted unit and then 3 irregular skirmish foot units (made from 1804 Victrix French). As such they will form a small anti-guerrilla force I can back up with formed troops (I’d love some lancers!!)

So here they are irregular cavalry : 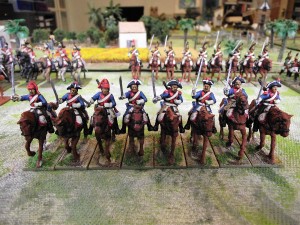 I thought they would have Hearth and Home, Moveable Deployment point and Surly as characteristics. All told should be about 3 points on the Sharpulator.

Here is another shot: 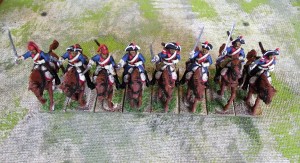 Looking forward to using them!!