Thought I would have  a quick Halloween Game – my Big men vs the Spiders. The Big Men are childrens toys bought from Wilkinsons I displayed on an earlier post – https://diggingforvictoryblog.com/tag/90mm/

I have based them up on 10cm hex bases, the mounted stuff on double hexes. I have also now based up my Shleich troops as well – as they fit very nicely. Thought I would put together a little Halloween skirmish….

In the same way as I got the Big Men – these spiders were going for dirt cheap as children Halloween toys in various supermarkets………..A quick tone wash for the big spider, and a blue grey dry brush for the smaller ones – and hey presto – a frightening Spider attack. 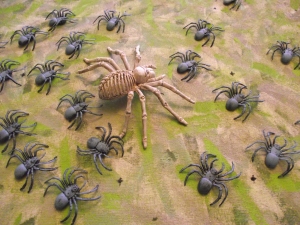 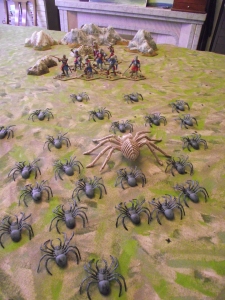 So the Spiders attacked the Big Men holed up in rocky scenery…………..I didn’t realise how quick this was going to be…

The Big Spider hit the knight hard and fast rendering the lance pointless – the little ones then swamped him and he went under. They then moved to the foot men – who stupidly didn’t run………… a few casualties from the bowmen – but it was quickly all over.

So much for the Halloween Game – the Spiders march on – I will have to see if post Halloween there are any stocks going cheap in the supermarkets to boost their numbers. Next time a bigger game with all my Big Men!!

Next time tactics have to be kill them as they come in!!