Last year I created a 5 game series of the first day of the Some in 1916. This saw the 5 British Corps attacking the German lines after a 7 day bombardment.

At the time I considered then creating a game that would take the story all the way from the second day to the campaigns end in November that year. Other things came up, other games went forward but now I have been spending sometime working on this game.

Having created a basic feasibility document, which included a turn sequence and concept framework I needed to move forward to creating a prototype, and then developing the rules through game testing. 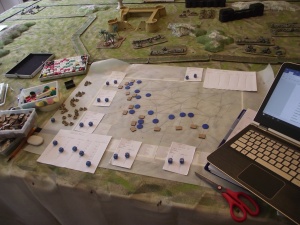 In the picture the map of the Somme has been reduced to a network map of nodal points, and the units abstracted a little to show the corps axis of attack. The idea behind the game is that it is an army level resource management game – the actual combat is quick and easy, but reflects the bits and hold strategy then used. 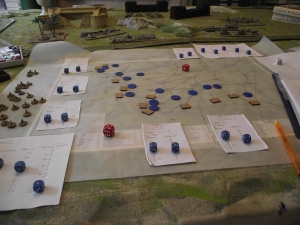 The idea is the general, the player, has to manage logistics, reinforcements,  politicos, training and doctrinal advances. All this then feeds into the strength, number and capability of the units in the front line. The game represents 20 weeks of fighting in the Somme so with this timescale wider issues such as politics and training can be incorporated. An event mechanism will allow the addition of divisions, specialist units, artillery bombardments and political events such as commander changes, all randomised to allow repeatability.

Having got the fundamentals right – this needs a lot of play testing to tweak the tables………..

2 thoughts on “Developing a new game – The Somme Campaign”