Painting Figures – getting there slowly

Not exactly going fast is it!!

Next up is the final ECW regiment of 40 figures…….plus I need to do all the Celt bases. Sadly (or happily) the weather is getting better, and drier so more time spent outside is required which will cut down the painting time a lot – however, I have a weeks leave coming so perhaps I can catch up.

I’ve ordered the Torch supplement for Battlegroup – and as such looked at my Italians and felt they need support – so with some delay repay train travel compensation I have ordered some 15mm 90mm AA (AT) lorried guns!!! Yay.

I know this goes against my aim of not buying anything until I have painted the plastic mountain – but this is a new range from BattleFront – and they tend to only produce limited amounts – so I need to get in there fast – that and the fact they were revenue neutral (i.e they were bought with money I had already spent on train fares).

So to the next project – the deserters Sharpe Practice force.

I downloaded and read Sharps Enemy last week, on the vain hope I could glean some leader names of the deserters. Sadly I only got Obidiah Hakeswill and Marshal Stock pot (Pot-eu-feu). Above is my badly photographed attempt at Obidiah – an basic English sergeant – I then got a arm and shako  – joined the two and voila!! – Hakeswill talking to his mothers picture in his hat!! 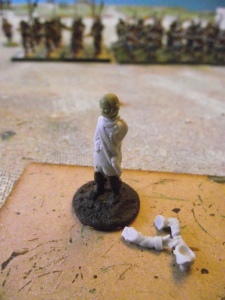 After reading the book though -I felt this was not a suitable start point – it was too thin and not fancy enough.

If you take the description from Bernard Cornwell of Marshall Stock Pot:

“His legs were cased in tall black leather boots, cut away behind the knees, and then in white breeches that were dangerously tight about his huge fat thighs. His belly wobbled as he laughed silently, ripples of fat running up his body beneath the flowered waistcoat he wore beneath a blue uniform jacket that was lavishly adorned with gold leaves and looping strands. The jacket could not button over his immense front, instead it was held in place by a golden waist sash, while a red sash was draped across his right shoulder. At his neck, below the multitude of chins, an enamelled gold cross hung. The tassels of his gold epaulettes rested on his fat arms”

I need a bigger base figure – I wouldn’t be able to build it up using green stuff – I am not that skilled!!

As to the history – it seems a Marshall Stock Pot actually existed in Spain – and was dealt with by the French (real) Marshal Massena – there were a group of 300+ deserters of all armies holed up in a disused convent – the French deserters abandoned Marshal Stockpot and were put in the front line of the assault to destroy him. The surviving deserters were then either shot – or delivered to the British who then shot them.

In the above link – Marbot (that well renowned self publicist) recounts the story. I find it strange that in my book, The French Invasion of Portugal 1810 Wiki – Jean Jacques Pelet – ADC – Massena doesn’t mention them at all…or Marbot. Hmm…more researching required.

Still I expect to find more. I remember way back when I first got interested in the French Army of Portugal doing the exact same research – alas now all forgotten (its a damn sight easier with the internet).

One thought on “Painting Figures – getting there slowly”