Wargaming and smallholding – all at the same time!

Kevin came a couple of weeks ago and stopped my ongoing experiments with Blue Stuff. Since then weather and other stuff has precluded me from re-starting them.
Whilst Kevin was here we played a game of Garlic Soup – which I put up on the blog last post. It’s interesting to see that nearly 40 people have downloaded it to date – if you have played it tell me what you think!! It was a great game we had – memo to self – never ever use Spanish Volunteer Militia to defend anything again, especially under Lt Tobias Tapas, who is the greatest coward and a fool the Spanish Army has ever seen!
Also whilst Kevin was here he helped me put together a new outside cage which is going to be for the Geese. As part of the strategy to stop the geese being gradually whittled away by Mr Fox (a Mr Fox that has just recently wiped out the neighbours ducks) we have in building a largish cage we can put them in whilst we are not around, and they can still be outside on grass. It’s big enough but not too big to be moved about. More about geese later.
Any way – the Spanish Town is packed away, except for the few buildings that need working on – I pretty much consider it a completed project. 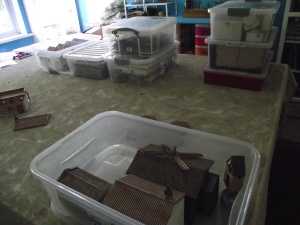 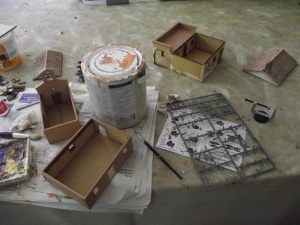 Whilst sorting through some stuff I came across this box of trees – the round wire covered ones – that I had years ago. My next minor project will be to base these up. 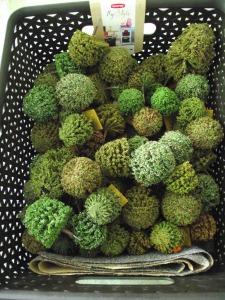 My next major wargame project will be the games table. Over the Summer recess I intend to completely redo my table, increase the storage space underneath and probably re-paint/texture the cloth. I also intend to replace the failing ceiling light in the room, and put in daylight LED’s as bulbs. The table is currently 10 foot by 6 foot, overlaid on a table tennis table which is 9 x 5. This table tennis table has so many supports and things underneath it makes using the space underneath to its full capacity very difficult. So it’s going, and I will build a whole new frame, opening up the space underneath, and putting everything not in a cupboard under the table. My long term plan is to have some rotating barstools to make it easier to sit at.
I’m in preparation mode currently, drawing up the list of requirements and costs. Pretty sure it could all be done over 2-3 days.
I am not sure whether to texture my cloth. I have already gridded it, I am sorely tempted to use some sand to texture it, and possibly some flock. My reluctance is based on the fear that too much texture will make placed terrain objects look awkward and uneven.
And a project for the smallholding. On Sunday we collected six 4 day old goslings. 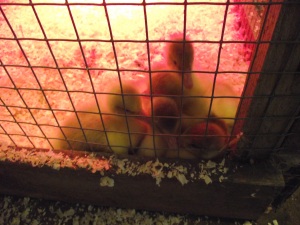 They are Emden Geese (or a local bred variety – the Stowe), and are so that we can up our numbers of Geese to maintain the small orchard field. We have them in a stall for the moment, under a heat lamp, but in 4 weeks or so they will be out hopefully, weather permitting. 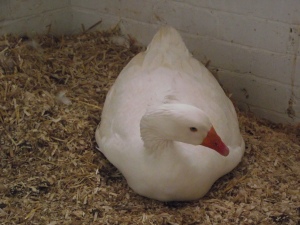 We will need to get them acquainted to our existing Geese, so when the Geese are waterproof they will go in the new Geese cage, where they can get to know each other through a wire fence, so no damage can be done. The farmer we got them from basically said the original Geese will either get on, or will kill them. We have merged flocks before so I am pretty sure we can make them all one happy gaggle.

The week long torrential rain has pretty much done for a lot of planted out veg, and the pigeons have done the rest. I am trying to get life back into the allotment field, but feel yields may be low this year! It has also done for some of the fields – the recently topped grass is now rotting underneath potentially killing the growing grass. ☹. Need some dry time to rake it up or turn it over.
And as for the Alpacas, we lost the oldest one a month ago – natural causes, she was nearly 20 and just faded away. I learnt a valuable lesson then – never ever look into a knackerman’s lorry – it was a vision of hell – dead cattle, sheep pigs the lot…all off to the crematorium.
Another of the Alpacas has an abscess, and two vet visits later, with the vet cutting and clearing out the blood and pus with her fingers, it’s now down to us to do this daily in an effort to heal the abscess, and dry it up. Tests have been done and the conclusion is that it is just an abscess, or perhaps a body reaction to a foreign element (such as a grass seed) – he may just have to live with a lump. It is not affecting his eating or drinking.

2 thoughts on “Wargaming and smallholding – all at the same time!”