Rules by rules – getting more simpler?

I seem to have a few days off work – so I can catch up on all sort of things, like this started nearly 3 weeks ago…

I started this blog post off as a reaction to the last post where I looked at some of the books that got me interested in smallholding. I thought it would be a quick list. As I have thought back and dragged out the dusty boxes of old rules and stuff I have got more immersed in how my thinking developed.

Apologies for the boredom it may invoke.

As with a lot of war gamers I started with Airfix 1/72nd Napoleonic plastic figures. I remember lining them up, and by the time they were all sorted, it was time to pack up and go home. I am not sure what we did in the mean-time for moving and firing, I do remember early on rolling marbles. I still have one plastic wood pile from the Waterloo set, all that is left from two sets.
From that, and buying my first metal figures, I got hold of WRG’s Wargame Rules for 1685-1845 (1979) – I was about 14-15 and attending Salute when it was in Chelsea, and loved that for the first time movement and firing were all recreated by a mechanism in the rules. For anyone who remembers them, the phrase ‘Surprised or Spanish’ turned up in most of the innumerable tests, and made my then opponent cry with rage! 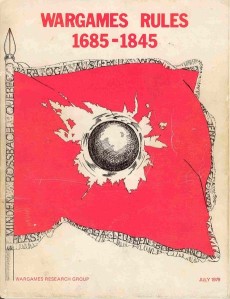 I used to write an account of the battle as it played out, all entirely biased of course, and read it to my bemused opponent the next day at school (Yes, I was sad at school). Perhaps I should start doing that again as there is no rule against still being sad!!
The rules were of an age and the many pointless tests, and the poor way it reflected cavalry melee led us to think and try to develop how an actual battle would play out. At about that time I graduated to the classic Bruce Quarrie book ‘Napoleons Campaigns in Miniature’ (1977). My parents brought this home to me, given to them by a relative somewhere, and I was gone ! (I still have it) I saw the Featherstone stuff in the Library of course but I never got into them, they seemed to simplistic for me back then. 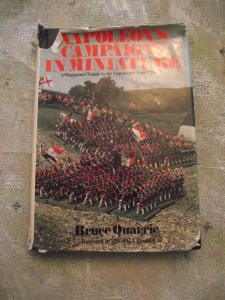 My old copy, well used but with a place on the bookshelf still.

It had National Characteristics, an idea that has truly come and gone. it also had ridiculous detail and a campaign system, what was not to like! From there I started to write my own rules, they were a telescopic time system, where you moved to the next action, and then worked back and calculated (by actually multiplying the individual minute by minute factors, not like Kriegspiel)) what and how much of something had happened. For example the damage done by a grand battery firing for 37 minutes at a brigade line. I actually had friends who were prepared to play them…These were the days when it was believed the more detailed the rules the more accurate a simulation you were doing. 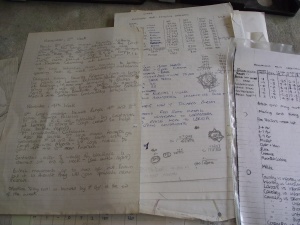 A peninsular campaign I attempted to do with my rules 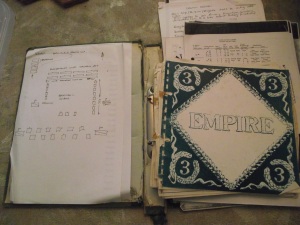 My truly knackered set of Empire III rules. Such a revelation at the time, not so much now.

Then, as if by magic Scott Bowden’s Empire III (1981) came out and I started playing them (again, I still have them – I thought at the time they were my rules made workable). In between, the Airfix Magazine WW2 rules (again by Bruce Quarrie, 1976) set was used for my nascent interest in WW2, with 6mm Heroics and Ross figures, bought by my brother because of his interest in modelling WW2 tanks. I remember painting them all in winter camouflage. 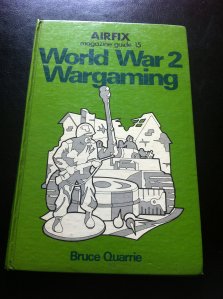 I even got the Empire version of the ACW – Scott Bowden’s Stars and Bars (1979), for my 6mm ACW figures I had inherited, and haven’t used since. I seem to remember it played alright. 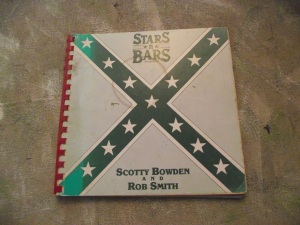 My copy, seems to have seen more use as a coaster!

Time flew past at school, my WW2 stuff was lent out and never seen again, my plastic Airfix went the same way. I was left with my 25mm French Napoleonic Army of Portugal, mainly created by Prinz August molds. I still have the Minifigs Polish Lancers I bought from Dave Watsons game shop in the Stow at Harlow when I was 11.
I joined a club, played and designed a lot of different games, including moving to Kriegspiel which we played over maps and as TEWTS. Then Uni, and jobs and life before coming back to it. 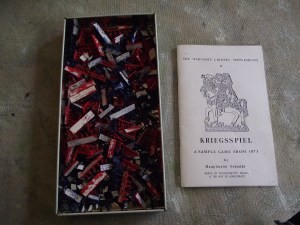 So presently I realised the other day that I currently have, unusually, quite a stable selection of rules, more so than at any other point in my war gaming life. I have several shelves of ‘used and no longer using’ shelves, and one shelf of current ‘go to’ rules:

For my 28mm Ancient British/Romans I have ‘To the Strongest’ (2017) – Grid based, card activated IGOUGO, unit based.

For my 28mm English Civil War I have ‘For King & Parliament’ (2018)– Grid based, card activated IGOUGO, unit based.

For my 28mm Napoleonic I have ‘Sharp Practice 2’ (2016) (plus my own addition Garlic Soup – urban fighting in the Napoleonic period) – Card activated random turn, 1 model = 1 man.

These are rules I have played over and over again, and have become pretty set (and set in my ways)

I am less sure on a few other areas:

6mm WW1 – I am currently using ‘Playing Leapfrog’ – but Kevin and I are looking for a wider covering set of rules
And for my 28 mm Colonial itch – The Men Who Would be Kings
Kesselschlacten – my 15mm Operational level rules, grid based, that I still need to finish.

I can see I have scratched a fair few itches with my wide ranging figures collections, but looking back at my rules story, it seems I have being making a clear route from complicated to simple, from detailed to abstract.

Interesting to look back.

2 thoughts on “Rules by rules – getting more simpler?”