UBOOT – The postman knocks once

Ooooh! look what the postman brought… 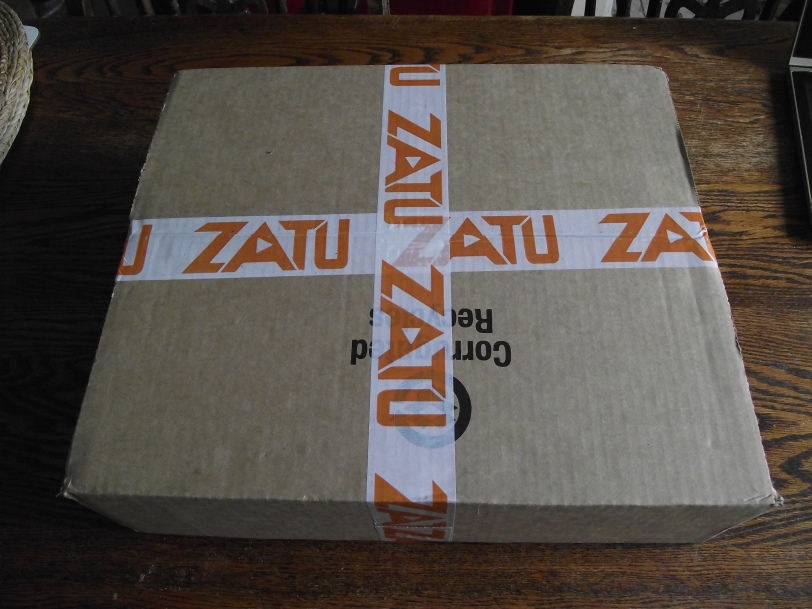 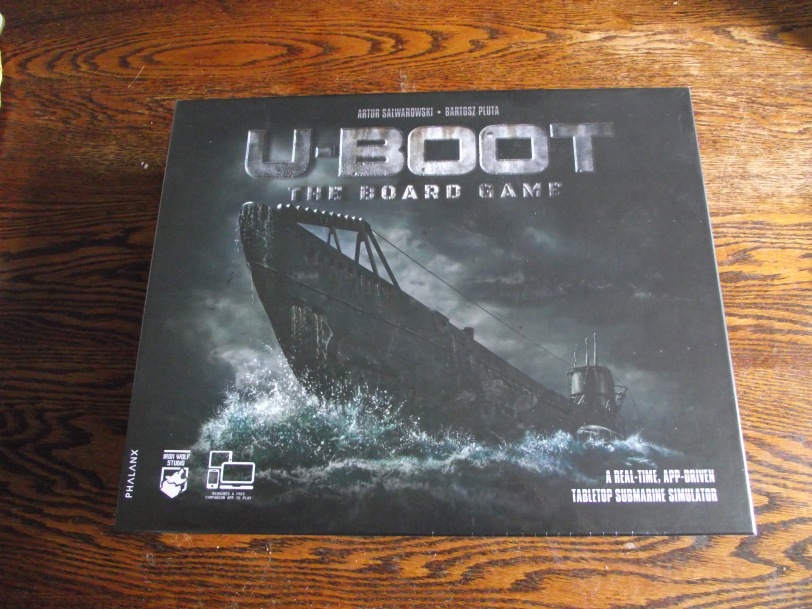 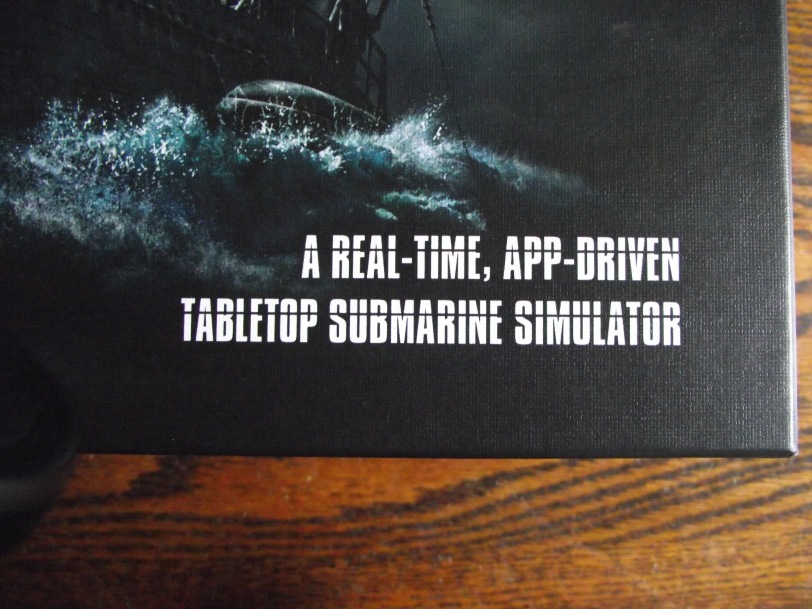 Questions, questions. So lets get unboxing it. First off 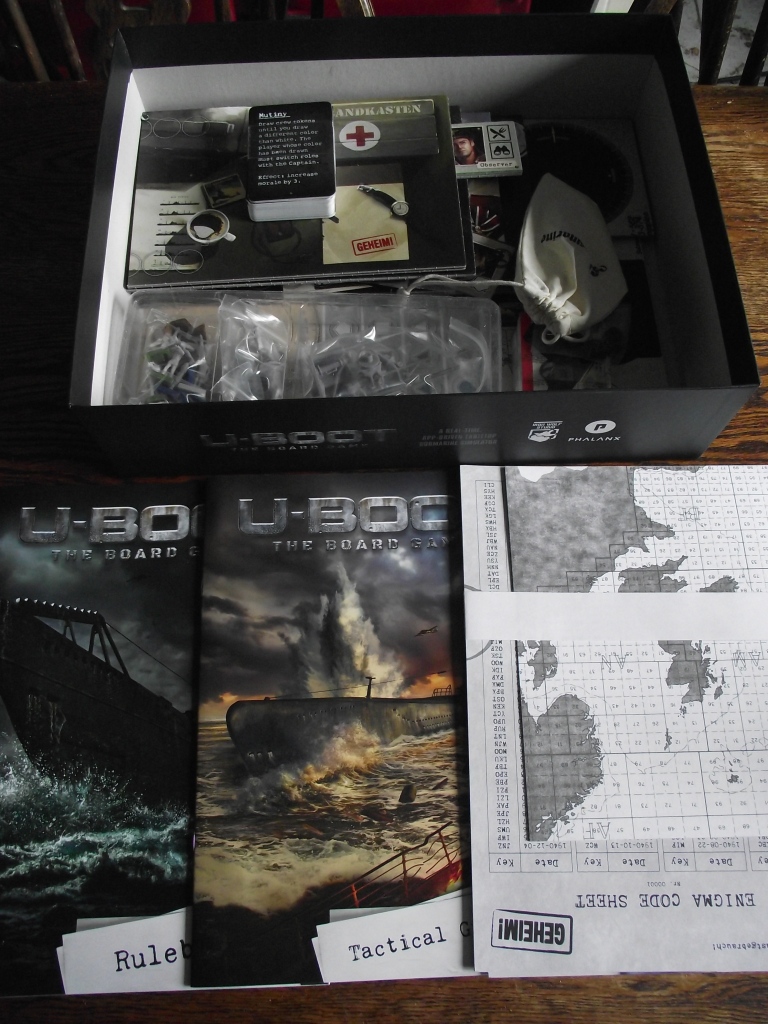 The rules, and a tactical guide. The game is for up to 4 players, each playing one of the four key positions, Captain, First Office, Chief Engineer and Navigator. It is a co-operative game, so all players are meant to work together running the sub on its missions. The missions are to basically sink enemy supply ships and dodge the escorts. As you can see, the typical squared ww2 naval maps there are aplenty, with the North Sea and the Atlantic being provided. 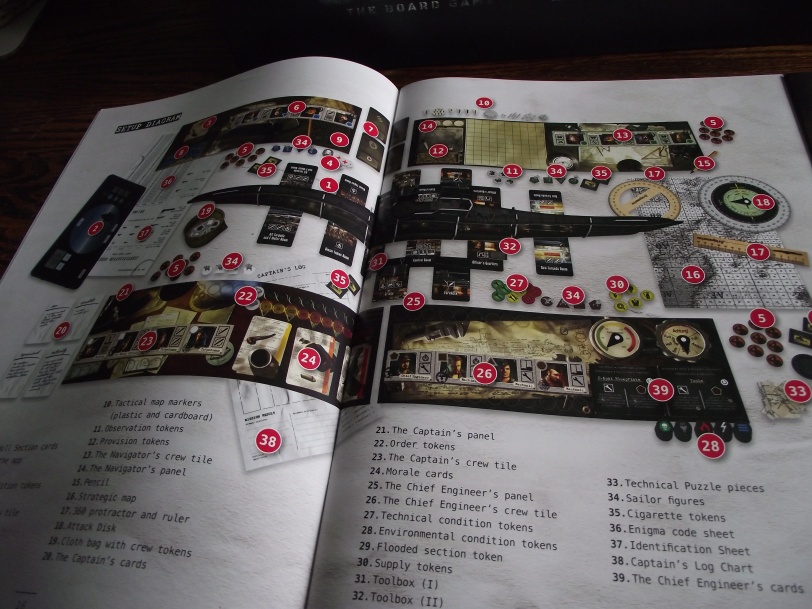 Inside the rules are clearly written rules, and useful images. this one being the game layout. Yes, it has an enormous model type VIII submarine as the centre piece! 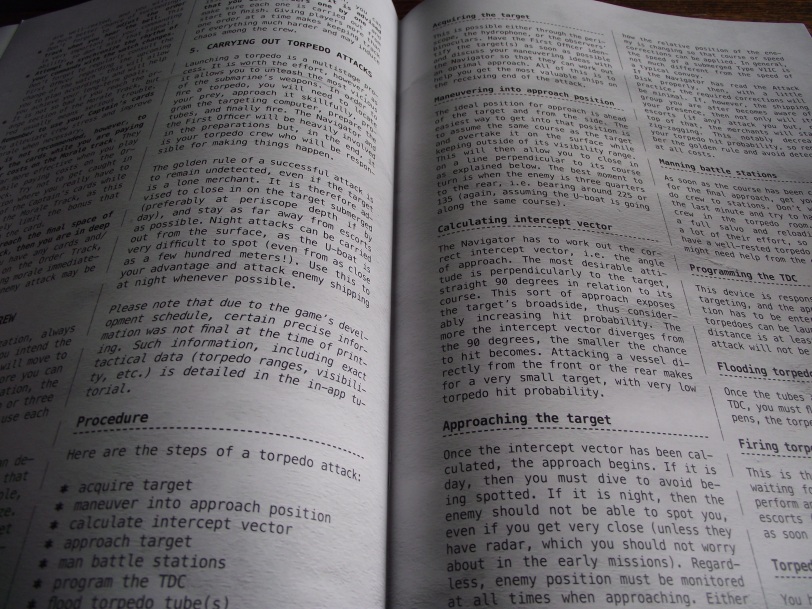 The rules are quite comprehensive, and from what I have worked through so far, fairly good at describing what you have to do. Here it describes firing torpedoes and calculating firing vectors (its easy). 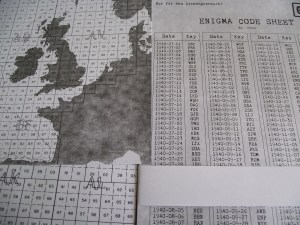 Another look at the maps, and the Enigma codes. Well, it wouldn’t be a simulation without decoding stuff from Enigma. Again in the game it looks easy, but historically necessary. All these sheets, because they get used and drawn on (you plot your course) are downloadable from the main website. 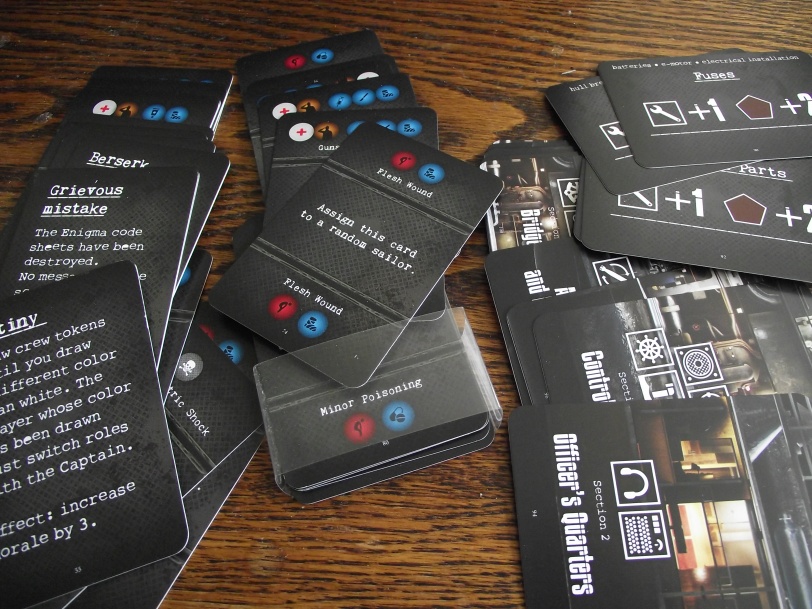 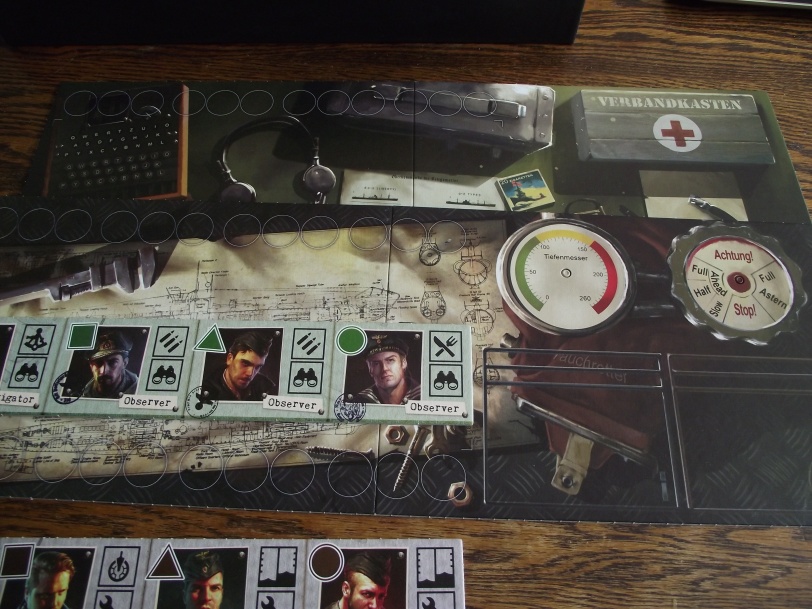 Each player has a play board in front of them, this is the Chief Engineer. On it you can see the first watch of men, because I didn’t know what I was doing then – this is actually the Navigators watch – there are men there that are Observers. There are two watches, every four hours game time they switch, by turning the strip over, and getting different bods with different skills. Thus you have to manage your staff, making sure the best ones are always in the best place. To the right is the depth gauge and the speed machine. below the Chief puts his tools, and manages the repairs and maintenance of the sub. You can see three blank circles underneath each man, this is to show how many actions each man can do, maximum three at any one time. Man and work management are one key in running the sub. 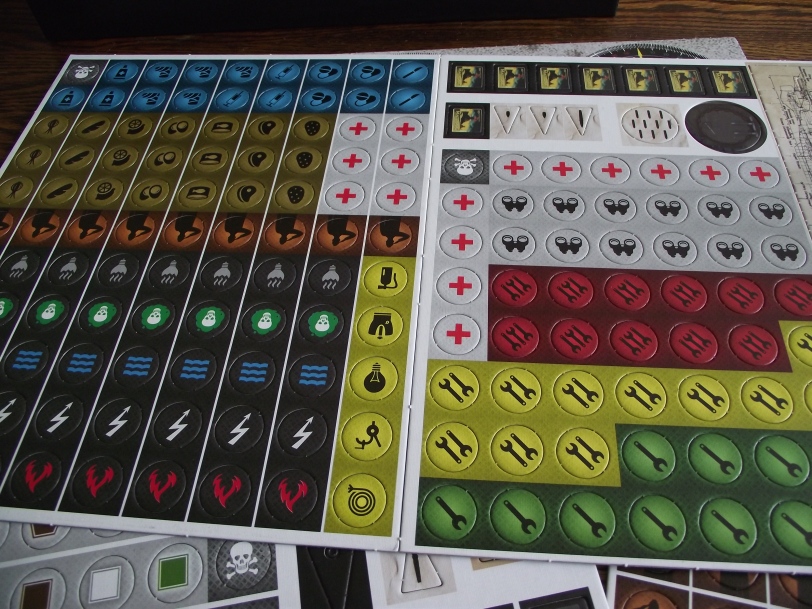 Four sheets of really well printed, thick cardboard counters that come off the sprue nice and cleanly. These are mainly Engineers counters, indicating differing malfunctions, and tools etc to fix. 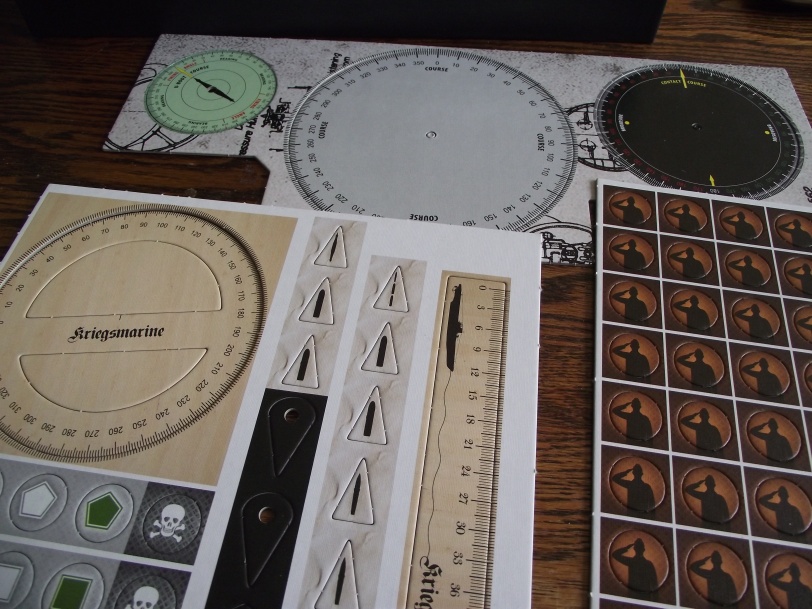 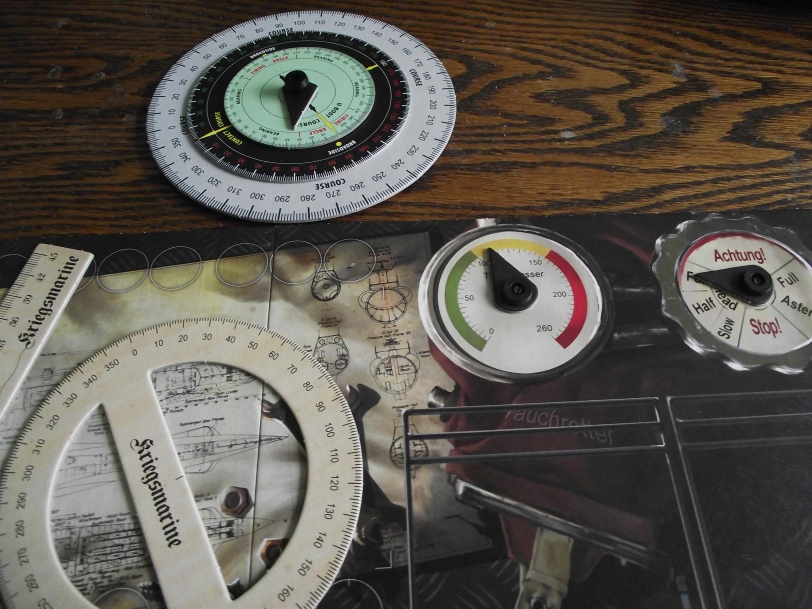 Here is more the Navigators thing. The course/bearing disc system (I don’t know the actual name) which you punch out and put together. I scratched my head and thought working course and bearings out, let alone working out the enemies course and bearing would be a complication too far for me. Having tried it, its so simple, its almost funny. Its such a simple logical system, based on the real world system, that I just want to shake the hands of the person who first invented it – well done Sir. To the left are the activation counters for each man, you put one of these down when they are busy. And yes, that is a protractor. 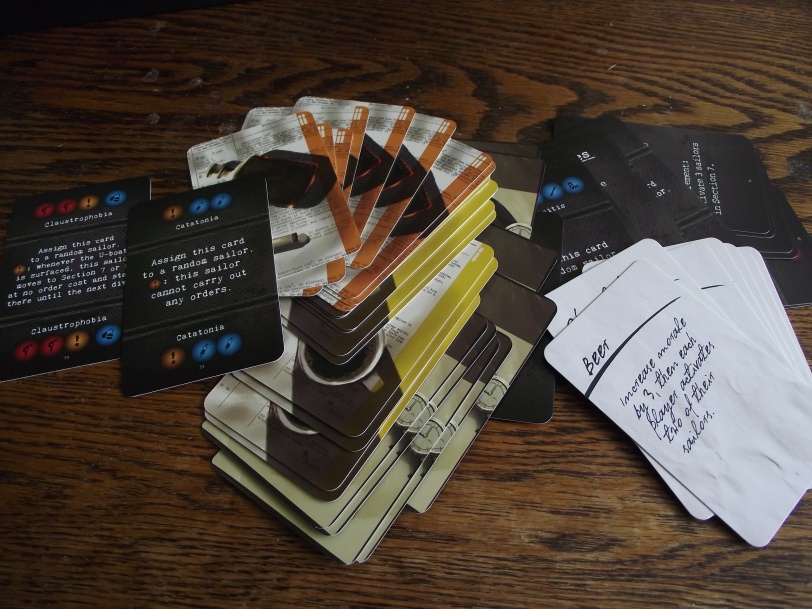 More cards, these are mainly the Captains cards, to do with Morale. Morale is important and various things can make it worse, and the captain has the ability to make stirring speeches etc to make it better. Also, food is important. You are given a larder of food and have to make daily meals for the men – dependent on how good it is will effect morale. This becomes important if the mission is a long one – food goes off, some foods are better and give a better morale effect, some foods are required to offset scurvy. Its all part of managing the men and the sub. 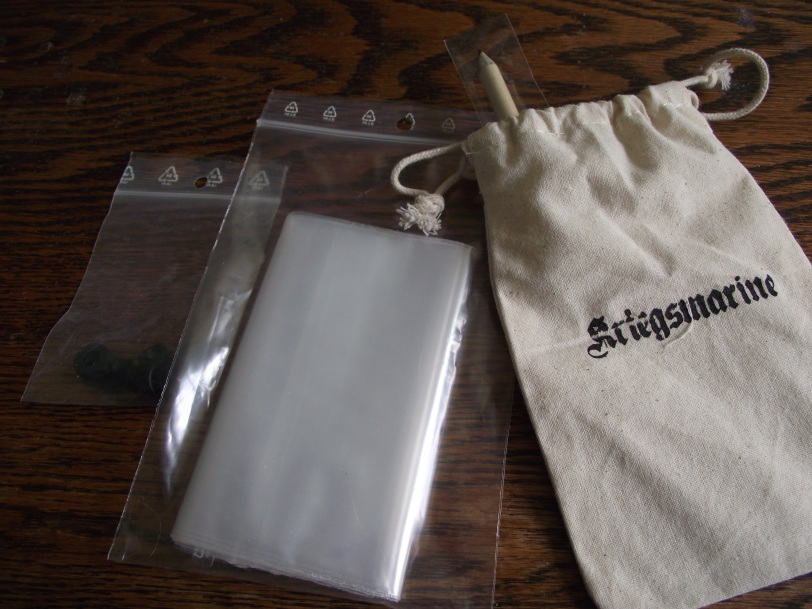 Also supplied a cotton bag to put counters relating to the men in, so that effects can be randomised between them. Also plastic bags to keep everything in (always welcome), and even a pencil for plotting courses on the maps. 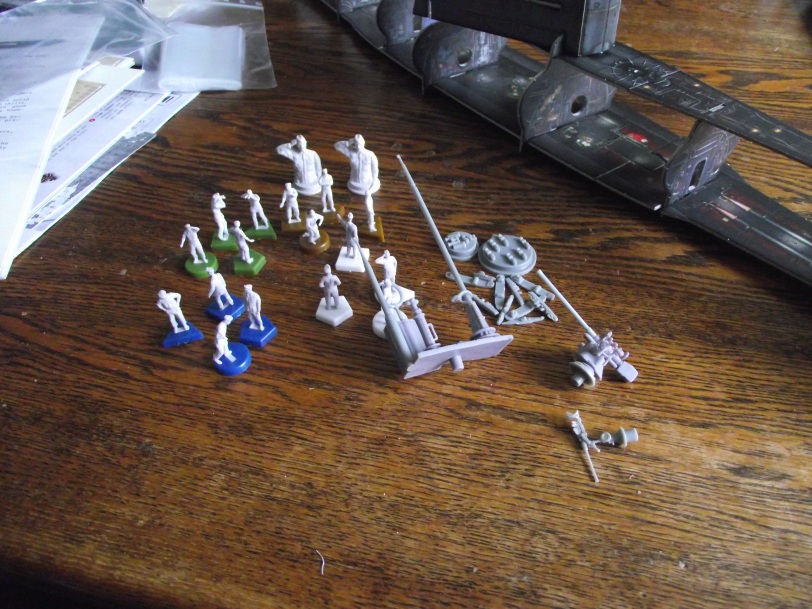 And finally, the men. Each player has a watch of four men, identified by a different colour and shape of the figure base. They are about 15-20mm size in hard plastic, quite nicely sculpted, and different. Also the sub – here is shown the resin 88mm and 20mm cannon, and at the back the sub… 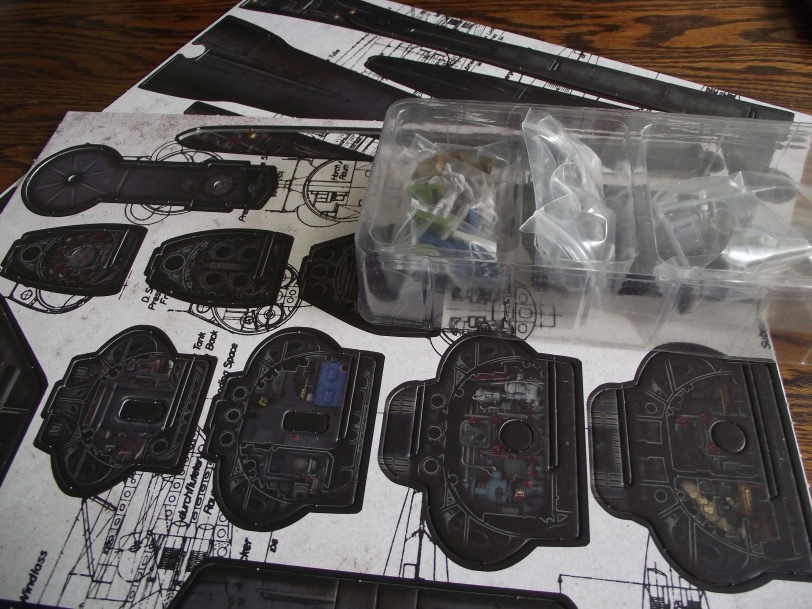 The cardboard pieces of the sub – the bulkheads. 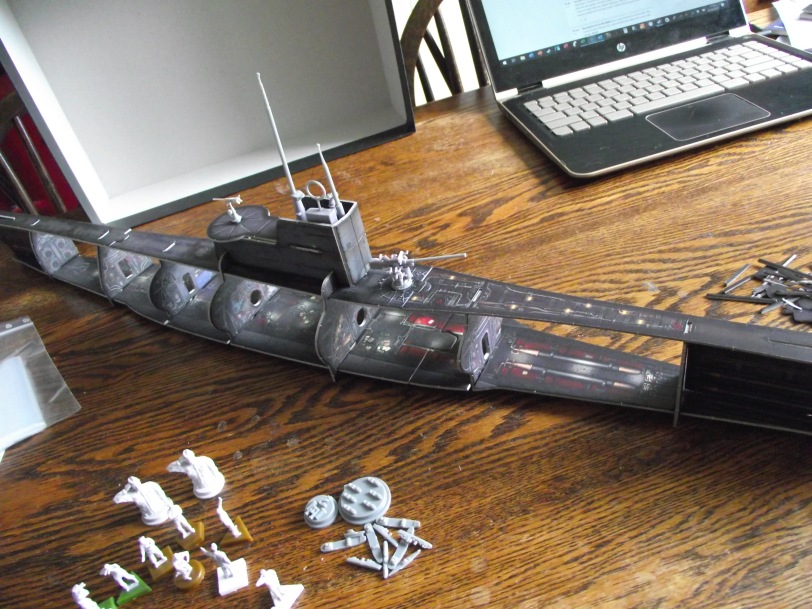 The sub made. its about 90cm long, in three parts creating 6 sections in which you place your men doing their jobs. Its pretty impressive, still playing with the idea that it might need a bit of glue to stiffen it up a little. Nicely printed, thick card, its very impressive on the table in front of you!

So what about the App? I downloaded it for free to my laptop, it was quite easy, no registration rubbish, and looks to be quite comprehensive. The game only plays with the App, which controls the enemy. It also manages the maintenance of the sub, messages from HQ and any enemy movement. You feed in your course and it will then move you (you can speed time up and down as required, and even pause). It will indicate when you meet the enemy, you can observe through it, use the hydrophone, and you move and fire torpedoes through it. 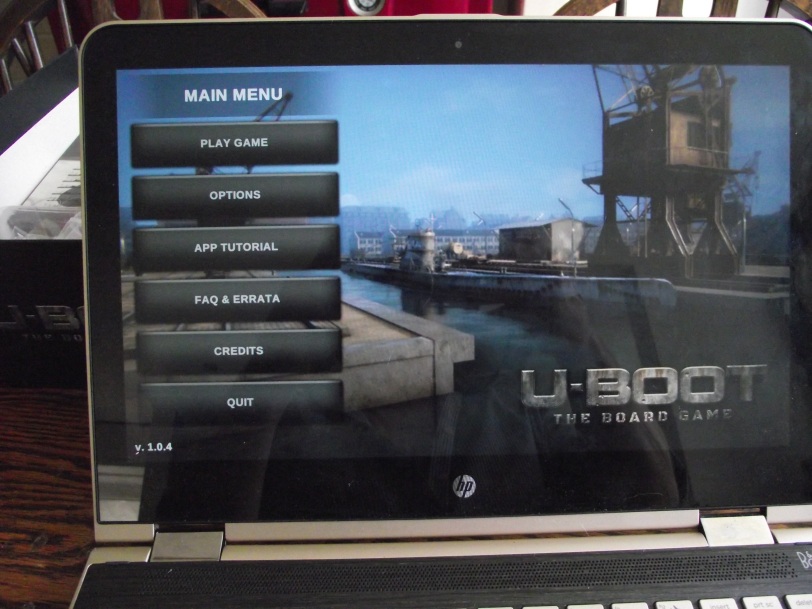 As you can see its crucial to the game, and the important bit is the training tutorial. As you can see, its not a video game, its an App supporting your boardgame. 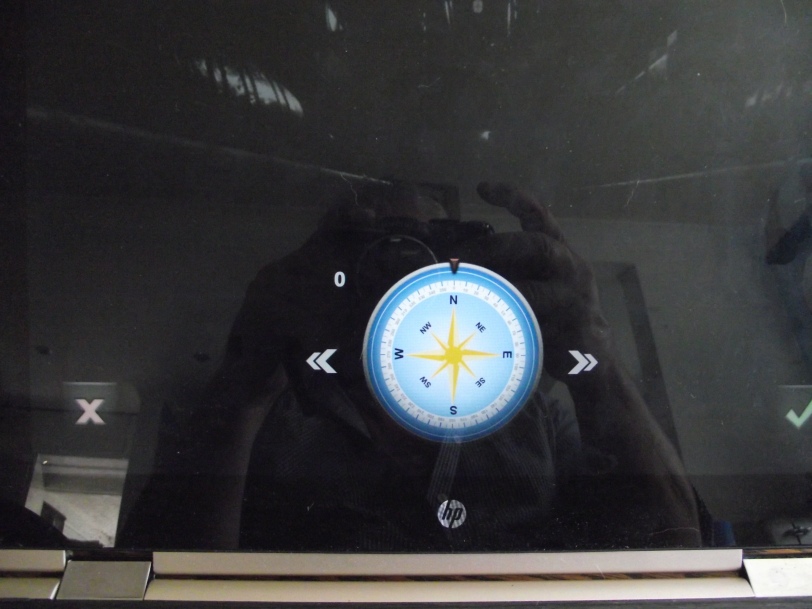 Here you feed in your course. 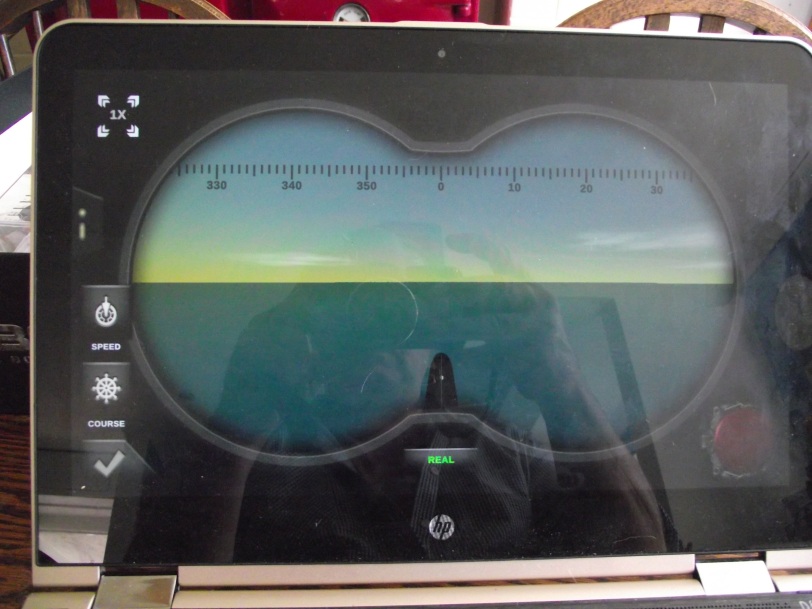 And this is the view of one of your observers, who can sweep left and right, up and down by either moving the gadget the app is on, or swiping your finger on the screen. If you meet an enemy you even hear the asdic.

So, I have read the rules now, and first impressions are this could be good. Its basically a resource management game coupled with a tactical combat game as when you go in for a convoy your moves, dives and appearances all matter very much – the Apps AI seems to be quite an enemy.

It can be played Solo or with anything up to 4 players. When I can get a crew together I will do a review.

Beasts of War video play through

4 thoughts on “UBOOT – The postman knocks once”